I am so excited to announce that Justice for Liberty has made nearly $1000.00 for donation to Holding Out Help! And the first months sales aren’t even over! Thank you to everyone that has bought a copy, reviewed and shared. We’ve started a Thunderclap campaign to try and bring about more awareness and would love your support. Make sure you check out all the other lovely authors sharing their snippets over at The Saturday Spankings Blog. 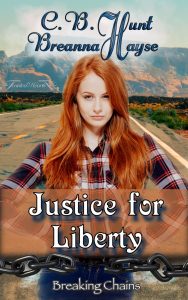 She waited until he left and then gently tugged Justice’s sleeve. “This is the first time we’ve been alone since I’ve come home. Do you want to watch a movie?”

“I know you’re still mad at me, and you have every right to be. I messed up. Papa said I’ve paid my dues and am allowed to start with a clean slate. What can I do to make it up to you?”

“Libby, you need to understand that I’m having trust issues right now.” Justice took in a deep breath. “I am so afraid of you abandoning my love again.”

“Would spanking me help things between us?”

“Spanking is not the cure for everything.” He rolled his eyes

2 thoughts on “Spanking is not the cure for everything #SatSpanks”